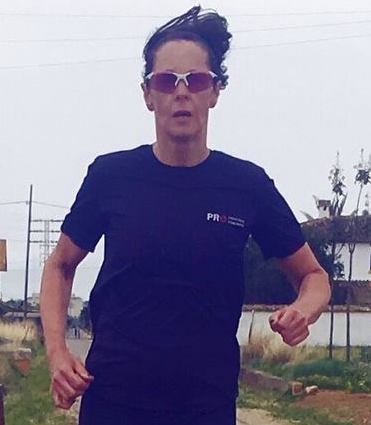 I came across Holly and It’s Nutrition after talking to some friends who had transformed their appearance over a matter of months.  Turns out they had met up with Holly for a nutrition plan and were delighted with the results, and I don’t blame them – they looked great and more importantly, they felt amazing!!

As a triathlete, and a fitter than average individual (well for age matched peers anyway!) I had always considered my diet to be ok, not a disaster, I knew there were places I could improve but I didn’t think it was too bad.  I had been trying to lose weight for the upcoming European Games at Strathclyde Park in August this year.  This is a hilly bike course and you just can’t deny the laws of physics, very ounce of weight must be carried up hills and this uses valuable strength and energy.  Body: weight ratios are crucial, to be competitive I had to get my body weight down to a healthy minimum while maintaining strength (or even increasing it!).  So, as a female standing 175cm tall I can’t help but give some weight away to those compact petite girls I will be racing.  Petite and delicate are things I have NEVER been called!!  My best option to try to try to shed the useless weight, those little flabby areas that aren’t contributing to forward momentum – they had to go.

After filling in my diet sheet for the week Holly informed me my diet wasn’t horrendous but had room for improvement.  In my efforts to lose weight I wasn’t eating enough, I wasn’t providing my body with the fuel it needed to function, so it was trying to rest at every opportunity.  To add to this, my hectic lifestyle wasn’t helping.  The quick grab microwave meals had to stop, and I had to become more organised.

Holly’s nutrition plan was an absolute master stroke and took all the thinking and, more importantly, that dreaded “what are we having for dinner tonight” chat out of my life.  I NEVER knew what I wanted, I was void of ideas, bored of the same old stuff, and sick of never getting any lighter despite my efforts.  Holly supplied a weekly plan, a shopping list, and clear recipes.  It was brilliant!!  I never had to think, if it’s not on the plan for that day you don’t eat it – it’s SO simple.  Suddenly life was simplified, and I was losing weight – at a rate I never thought possible.

I have finished a 12-week plan with Holly now, I am 7Kg lighter than when I started, and my BMI is now down to 19.  Vitally, I am training better, I’m sleeping better, and I have more energy than I ever had.  I have recently taken 45s off my 5Km PB to bring me closer to 18:30 than I ever thought I would be and I am rolling up hills on the bike faster than before with less effort.  Race season starts in 2 weeks for me and I’m now excited about racing on a hilly Strathclyde Park course that I was previously dreading.  I doubt I would be this ready for Europeans had I not found Holly – thank you so much